The last few weeks have been among the most exhausting and stressful that I’ve encountered in many, many years for reasons far too mundane (and personal) to get into. Suffice to say, I’ve been feeling flat out.

When stress hits, some people turn to food. Some take to alcohol. Others turn to caffeine, exercise, bad TV—you name it. But I’ve got dietary restrictions that limit what I can eat and drink, and caffeine and my stomach are not the best of friends. So what’s a gal to do when stress hits hard?

Certainly, I’ve watched my share of good (and bad) television of late in an effort to take it down a notch or two. But I’ve also taken to writing to blow off some steam. Not writing of the useful MFA program variety, or even of the lucrative freelancing variety. Instead, I’m writing fluff. And it turns out that it’s a wonderfully fun to write fluff—where there’s no pressure, no deadlines, no expectations. Nothing at all but me sitting by the fire with my laptop and churning out whatever I feel like writing. And what I feel like writing is pure fluff.

This would have distressed me to no end mere months ago. I would have further stressed myself out by worrying that I wasn’t expending creative energy in more serious ways. Now…well…who honestly cares? It’s fun, it’s harmless, and it’s gotten me through the rather tedious month of November and beyond. I wrote 51 pages of a new story last week, just because I was on edge.

So, while I cannot actually eat the marshmallow-y goodness known as Fluff, it turns out I can churn out fluff on the page at breakneck speed when my psyche needs it.

Now if only I could have some caffeine….

In the last week, I’ve read two articles in two very different publications about MFA programs. As a student in Lesley University’s low-residency MFA program, I clearly carry a bias in favor of creative writing degree or else I wouldn’t be enrolled in one. But in reading both of these pieces—Liesl Schwabe’s, “BEA 2013: Factory Town: New York City’s MFA Industry” in Publishers Weekly and Jon Reiner’s “The Modern Writing-School Paradox: More Students, Fewer Jobs, More Glory” from The Atlantic—it seemed clear to me that both were ultimately missing the point of the MFA program.

Liesl Schwabe likened the proliferation of creative writing programs in New York City to factories churning out a product. And while she concedes that the verdict is out “whether or not creative writing can or should be taught—or if the explosion of M.F.A. programs is contributing to or depleting the originality of contemporary American literature” she goes on to assert that, “it’s safe to say that in New York City’s world of letters, business is booming.”

In a city like New York—arguably the home to the U.S. publishing industry and a city with a rich cultural and art scene—it seems unremarkable that there would be a plethora of writing programs. As an editor and a writer, I bristle here and always when people refer to the making of books as a business. Sure, you have to make money or you won’t be able to continue to make books. But I challenge you to find anyone in the “business” who’s in it for the filthy lucre. We all know that we’re there for the books—for the creation of literature—not to get rich. And that’s the honest truth of the situation.

In The Atlantic, Jon Reiner seems to take issue even with the idea of literature, asking, “Why are there so many student writers at a time when the death of literature has become accepted wisdom?” There has been, of course, a lot of doom and gloom over ebooks and digital reading and how the publishing industry is dying. But as someone who works in the publishing industry and is also excited about the possibilities that digital storytelling can hold, I am here to assert that while the publishing industry is certainly evolving, it’s just as certainly not dead. Storytelling—indeed literature of all stamps—is not dying, even if in certain tony circles that’s the sophisticated opinion to hold.

Jon Reiner bemoans the way the publishing industry—perhaps in a sign that we don’t publish real “literature” anymore?—is “privileging ‘story’ over the craft of writing” as part of his critique of MFA programs. He also claims that, “The sprouting of writing programs indicates that the lure of having people read and applaud your work still outweighs the fears student writers may have about the pain and aggravation of being called “witless” in a public forum.”

My personal experience as part of a creative writing program tells me that both of these statements are blatantly false. The very essence of the program I’m lucky enough to be a part of is the craft of writing. If the students in this program were only interested in the basest levels of storytelling, I’d argue that they wouldn’t be there at all. The entire program is about honing your craft—and not just on the sentence-by-sentence level (although as an editor, I know how important that is, too).

The idea that one would enter a creative writing program—and spend a whole lot of hard-earned cash on it—simply to get praise for one’s writing is not only misguided but just plain wrong. If you want to get your work blindly praised, share it with your friends and family. If you want to hear some hard truths about your writing and how to improve it, you can check your vanity at the door and enroll in an MFA program.

What both of these articles also miss is that a creative writing program is not an industry or a way to avoid ever being critiqued—it’s a rich community of fellow writers who are also honing their craft and who’s work and opinions help you grow as a writer with each passing day. And that’s a gift, not a factory. 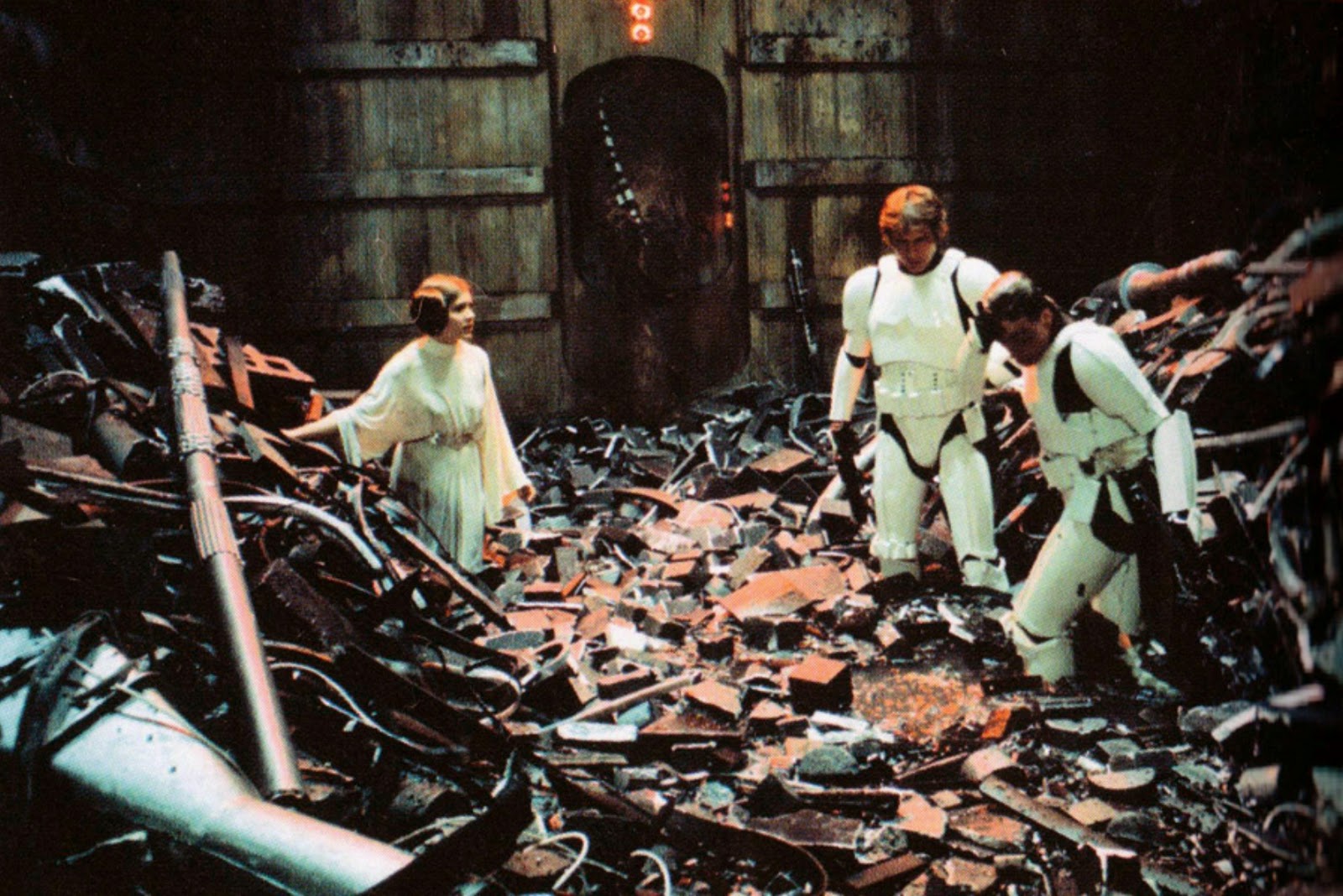 Sometimes as a writer, you’re going along perfectly happily rescuing the metaphorical princess Leia of your story—and then a deadline that seemed quite far away starts to close in on you like the walls of the trash compactor on the Death Star.

You try to brace for it, but there’s nothing that can hold the huge steel walls of the compactor at bay. You feel something brush against your leg and know that nothing good is lurking underneath the filthy water. There are no droids fiddling with the computer system to save you.

And quite frankly the smell is getting to you.

My latest deadline in my MFA program is today, and even though there’s not a heck of a lot I can do to my work at this late stage, I’m still feeling the crunch. I know everything will get sent off in proper fashion, but it’s hard not to feel that if I just had more time to revise, I could make this submission just a little bit stronger, a little bit better.

In other words, it’s a self-inflicted trash compactor of doom, and the walls closing in on me are ultimately comprised of my own compulsion to try to make everything perfect. Which means that droids aren’t, in fact, going to be able to save me—only I can.

Choosing to try to write means choosing to accept your (and your writing’s) imperfections, even while trying to work through them. That said, there are definitely times when I wish there was a Force to reach out and guide me to right path, the right turn of phrase, the perfect revision. That I could send a garbled message telling Obi Wan that he’s my only hope—and that somehow Alec Guinness will put together a rag-tag group of kids to come and save me.

Barring that, though, I guess I just need to let go and get my submission in!