“Dear old world,” she murmured, “you are very lovely, and I am glad to be alive in you.”

L.M. Montgomery wrote about kindred spirits—the people who’s souls speak to yours in some deep and important way and who become the best of friends and comrades. I think there’s such a thing as kindred places, too. And Acadia National Park is just such a one for me.

Thankfully, last week I got to spend several days there with the two most kindred of spirits, my husband and my kiddo. Usually, we go to Acadia in the summer—swimming in Echo Lake, climbing every mountain we can get our hands on, and generally enduring the enormous crowds on every one of them.

In April, the park is very different. Most of the time we were there, the normal greens and blues were replaced by varying tones of gray. This was no less beautiful, but very different from what we experience when we go in August.

The sun was out on only a single day we were there—the rest of the time, the weather ranged from cool and misty to very cold indeed with a driving rain. We found this did not hold us back.

Indeed, there was much to see in the gray of April that you miss entirely in the summertime. The views from the mountaintops were different without those pesky deciduous tree leaves to block them out. Of course, there was fog to block out the view, but that’s another story.

Plus, we  got the occasional glimpse of something like this tiny nest (measuring only a few inches in height) hiding in a hedge.

There were deer and loons and woodpeckers, and frogs to serenade us at twilight.

There were also important lessons learned.

For instance, if you give an eight-year-old a cheap one dollar notebook and tell her it’s a travel journal, she will take writing in it hyper seriously, and keep its contents strictly under wraps (journals are private, after all).

The weather can change from 35 degrees with driving rain and gale force winds to nearly 60 degrees and warm sun—and then back again—in a mind-bogglingly short period of time.

Then there’s the importance of watching where you walk. It turns out that if you’re paying more attention to where your kid is stepping than to where you are, you will sprain your ankle (who knew?) and then have to hike another couple of miles back down the mountain and to the car. After which, you will spend weeks to come in an air cast.

But if you can, using Elsa from Frozen as your role model, just let it go, taking the good with the bad and focusing predominantly on the former, you can enjoy every blustery and beautiful, arctic and aching moment of vacation.

“Anne had a long meditation at her window that night. Joy and regret struggled together in her heart. She had come at last . . . suddenly and unexpectedly . . . to the bend in the road. . . . but Anne realized as well that when she rounded that curve she must leave many sweet things behind . . . all the little simple duties and interests which had grown so dear to her in the last two years and which she had glorified into beauty and delight by the enthusiasm she had put into them.” —L. M. Montgomery, Anne of Avonlea

It is not unusual for Anne Shirley to come to my mind unbidden, but today, this particular passage is first and foremost in my mind. Because I’ve come to a bend in the road—one that I hoped for and need, but one that also is bittersweet as all such things must be.

After nearly seven years—long enough so that my daughter has no recollection of me working anywhere but there—yesterday was my last day in the office at a publishing company that I love dearly. I’m not leaving completely, of course. I’m extremely pleased to say that I’ll still be acquiring and editing books with them. But now it will be as a freelance editor working from a quiet corner in my own home.

There are many wonderful things about this, cutting the endless commute out of my world not  the least of them. But it also gives me time to deal with schoolwork, time with family, and time to write in a more meaningful way—all while still working with authors and illustrators and on books that mean an awful lot to me.

On the flip side, I will miss the colleagues and friends in the office who have played such a huge role in my world week after week, year after year. And that’s a pretty gigantic flip side.

In the end, though, I welcome this bend in the road, and if I face the uncertainty of what lies beyond with a little bit of wistfulness, I also face it with great hope. Because there’s beauty and delight in what’s already been—and perhaps still more in what’s to come.

After seeing a link in PW Daily to this wonderful slideshow of the ten best literary meals on The Telegraph, I started thinking of literary grub myself. It’s not that I disagree with The Telegraph’s choices. (Okay, maybe I do. Thin gruel? Really?). It’s just that I’ve been known to cook, and eat, based solely on the literary merit of a particular food or drink. Heck, I’ve been known to take entire vacations on literary merit alone.

So here’s a small sampling of some of the foods and drinks that books have inspired me to try.

Butterbeer: I tried this for the first time ever a couple of weeks ago, thanks to a good friend and fellow Harry Potter enthusiast, and admit that it was kind of a thrill. Very, very sweet. But still kind of a thrill. Now, would I also want to try Chocolate Frogs? Why yes, I would. Every Flavor Beans, however…not so much. I like to think I’m an adventurous eater, but yet still am not eager to sample anything that claims it tastes like earwax.

Porridge: On our honeymoon in Scotland, I determined that if porridge is good enough for Mary Lennox, it was good enough for me. I’ll never want a bowl of regular old oatmeal. Hearty enough to support one in traversing across moors with boys who talk to animals—or at least my husband, who only talks to our guinea pig—it’s tasty as all get-out as well.

Chamomile tea: Inspired by Peter Rabbit’s post-McGregor stomach ache, I sought out this soothing herbal tea. Turns out that drinking a hot beverage made from steeping tiny flowers is not the wisest idea for someone with allergy issues. As soon as my throat began to swell shut, I knew that relying of naughty rabbits for inspiration as to what to eat or drink was a terrible, terrible mistake.

The waters at Bath: Here’s a tip that no one in Jane Austen’s Persuasion ever tells you: if it smells like sulfur it will, in fact, taste like sulfur. And while I don’t regret trying taking the waters (in Bath and in Cheltenham—I am a sucker for 19th century spa towns), I can’t say I felt anything but mildly ill after having done so. But when you’re in the Pump Room pretending to be Anne Elliot, who really cares?

Despite the occasional miss (or, you know, inability to breathe), I’m always up for trying something new. Got some literary food obsessions? Do share!

There are girls (and women) who have a serious soft spots for the bad boys of life and of literature—many of my dearest friends among them. For some reason, I have never, ever been one of them. Sure, Heathcliff is fun to read about, but would you really want to hang out with him? Even when I was much younger, I tended to lean toward funny, smart, charming guys.

Thankfully in the world of YA literature, there are still plenty of these “good” boys to have crushes on to offset the depressed, darkly brooding romantic heroes that still plague the pages of books everywhere. And, to celebrate Valentine’s Day, here are a few of my favorites. Anne thought she wanted brooding, but it turned out she wanted Gilbert. Sure, he started off his relationship with her by pulling her braids and calling her “carrots.” But soon thereafter, his roguish good looks and playful spirit won all of our hearts. Though it looked like he’d never gain Anne’s affections, his love stayed true, and he persisted in dreaming of his life with her. Generations of girls have swooned.

Po may have looked like something of a bad boy—piercings, tattoos—but was good to his very core. His romance with (arguably a bad girl) Katsa is one of the most believable love stories in YA literature. Their internal conversations once she realizes what his grace truly is are almost thrilling in their understatement. And those silver and gold eyes…sigh.

Will Parry, from Phillip Pullman’s His Dark Materials trilogy

Brave, noble, loyal and utterly trustworthy, Will fights to protect his mother, and ultimately gives up his true love in order to save the rest of the universe(s). He’s definitely cut from a more serious cloth than the previous two romantic heroes, but he’s the type you’d always want in your corner. 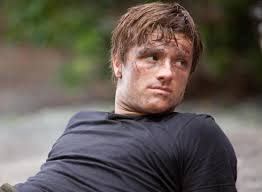 The whole Gale thing never really held any water for me. It was Peeta all the way, from the moment he threw the bread to a young and starving Katniss in the first book. My heart broke for him when the Capitol managed to make him lose himself—the one thing he most feared—and then cheered when he ultimately came back to himself and Katniss. He’s a golden dandelion of hope.

Augustus Waters, from John Green’s The Fault in Our Stars

The thinking girl’s romantic hero, his thoughts were stars he could not fathom into constellations. I literally laughed and wept when reading this book, and felt—along with Hazel—thankful to have known Augustus. To write more would be to get emotional about the book all over again. And I’m just not going there on Valentine’s Day.

He writes songs, he’s a computer nerd, and he’s the older brother of Mia’s best friend. But who, really, didn’t could resist a boy who writes songs about you being a tall drink of water? Mia couldn’t.

And, the ultimate proof that I love and cherish good boys? I married one. Smart, funny, charming, incredibly caring—he’s the love of my life. So, Happy Valentine’s Day to him and to you…and to whoever your romantic hero is!