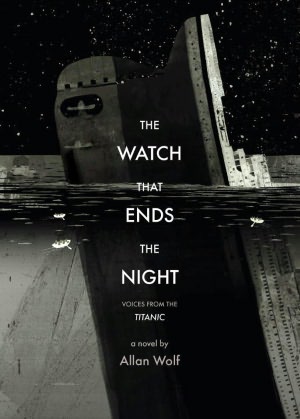 There are so many books and movies about the tragic sinking of the Titanic. With a market so glutted, a story so often told, how could you find a way to tell it once again that felt new, different, emotional? I’d be at a loss, but not so Allan Wolf, whose The Watch That Ends the Night does all of the above. (Full disclosure: once upon a time, I worked at Candlewick Press, the book’s publisher).

Told in verse from multiple perspectives–from posh millionaires to poor emigrants, from the ship’s captain to the ship’s rat, the range of voices and experiences of this tragedy is wide and all-encompassing.

Which brings me to the Iceberg.

Never before have I read anything in which voice was given so convincingly to something that isn’t actually, well, alive. The Iceberg is gigantic, godlike in its scope and vision, and completely fascinating. It feels it has a date with destiny when it comes to Titanic, but in the end, the collision changes the ice as  much as it changes the ship.

The Iceberg also acts as almost a foil, and certainly as a counterpart to the undertaker in ways I won’t describe here, so as not to spoil all the chilling glory of discovering it as a reader.

So, is there a way to make the story of the Titanic fresh and different? I’d say the answer, thanks to Allan Wolf, is a resounding yes.